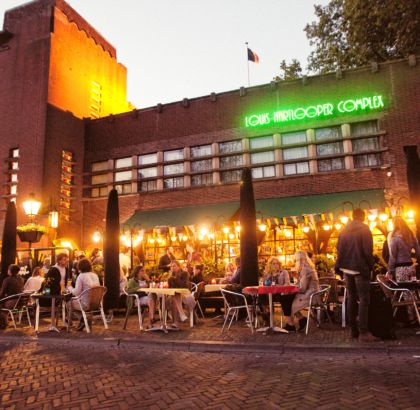 Louis Hartlooper Complex (LHC) is an arthouse cinema, cultural centre and catering facility in the city centre of Utrecht. Since its opening in 2004, it has grown into a buzzing meeting place that has become a vital part of Utrechts cultural scene. After its first year, Louis Hartlooper was already voted Best Arthouse Cinema in the Netherlands by Vrij Nederland, an honourable mention.

The well-attended weekly film program is interspersed with special events and film series, such as Psychoanalysis & Film, Movies that Matter and our Timeless programme (film classics). Special screenings are often accompanied with an introduction by an expert or a Q&A with the director or the cast and crew of the film. We host various festivals every year, such as the Netherlands Film Festival (NFF), Kaboom Animation Festival and CampusDoc Film Festival.

As a cultural meeting place, Louis Hartlooper partakes in special initiatives in the field of both image and film culture. We gladly collaborate with other parties to support cultural projects and activities. For example: At Louis Hartlooper we enable young or starting artists to exhibit their work in our foyer every month.

Louis Hartlooper is also suitable for venue rental during the day. The venue is ideal for (work)meetings, symposia and film screenings. In addition to the five cinema rooms (ranging from 26-201 seats, including a stage), there are various options in the Foyer, the Salon, Café Das Kabinett and in our conference room.

Louis Hartlooper is initiated by filmmaker Jos Stelling and is located in a former police station. By looking at old schools and churches, Stelling came across the vacant Tolsteeg police station in 2001. A national monument built in the Amsterdam School style. City architect J.I. Planjer designed the building in 1927 at the same time as the adjacent bridge with quay wall and tram stop. Stelling managed to buy the unique building from the municipality, with the aim of turning it into an arthouse cinema.