Eastern Neighbours Film Festival presents a special screening of the Oscar nominated documentary Honeyland (Ljubomir Stefanov, Tamara Kotevska) in LHC. This Macedonian thought-provoking film with marvellous photography, will be accompanied by the director of photography Samir Ljuma, who will give a masterclass after the screening.

Hatidze, a Macedonian village woman, devoted her whole life to beekeeping and selling honey. She lives high in the mountains, being isolated and lonely. She is probably the last female wild beekeeper in Europe who nourishes the ancient style of working, trying to save the bees and maintain the natural balance in their environment. Her Honeyland gets invaded by a big family of nomadic beekeepers, who make her happy and sad. Their bee keeping techniques threaten her wild bees and her own livelihood. This film revolves around Hatidze’s struggle to save the bees, her day-to-day modest surviving needs, while taking care of her old and bedridden mother. The directors, to whom this film is a debut in the feature-length production, observed for three years their protagonist patiently, meticulously investing not only time but lots of love as well.

Please note: we charge an additional fee of 5 euros for Cineville passholders and “Strippenkaart” holders. 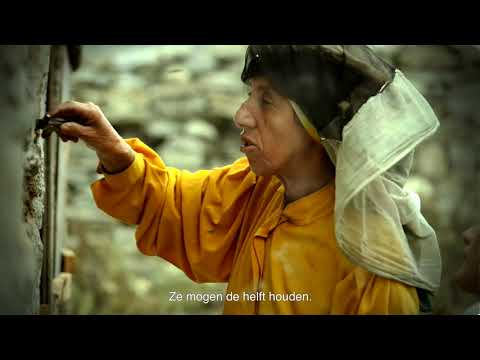